Learning Tools Interoperability (LTI) version 2 is the latest step in the evolution of this highly popular standard and its single, most dramatic, upgrade in its history.  This article introduces LTI 2 by examining the characteristics of its predecessor versions and calling out the forces that has led to its redesign.

LTI 1.0 was a success almost from the moment of inception for several simple reasons:

The key to understanding LTI 1.0 is to realize that it focuses on one, and only one, aspect of tool interoperability, the tool’s launch.

A very common user story for LTI is the opening of an e-textbook from within the LMS.  This is such a widely used case it’s often been called the ‘killer app’ of LTI.

A student logs into her LMS, proceeds to her math course, and finds that her instructor has placed a link to a calculus text.  She clicks on the link and the book opens to chapter 3; to the very page of the next assigned reading.  She then reads, advances through other pages, jumps to references, leaves notes, etc. 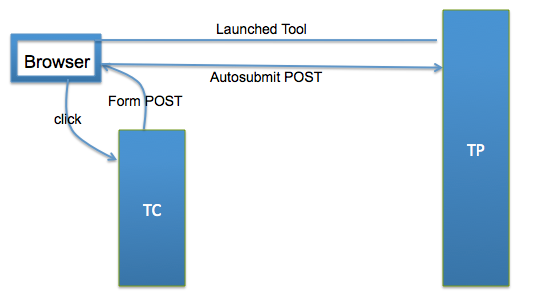 The peculiar piece of orchestration (step 4) is essential to the LTI launch; it ensures that the source of the launch is the user (actually the browser, the user’s agent) rather than the TC server.

LTI 1.0 is solely about tool launch.  Think of it as being like a cannon firing a cannon ball:

We’ll use this metaphor again as we examine successor versions.

After LTI 1.0 established itself as the premier interoperability standard, a particular need arose that caused a change to its specification.  Some learning tools return a grade from the tool that the tool would like to pass back into the LMS gradebook. Since LTI 1.0 lost contact between TC and TP after launch (cannonball past the muzzle) another communication channel was required to get a tool outcome back from the launch and redirected to the gradebook.

At week’s end, our calculus student is ready to take a weekly assessment.  She presses the link and it now directs her to an exercise within the book (or possibly in a separate standalone assessment tool).  She takes the exercise, feels good about the results, and submits the result.  When she goes over to her LMS gradebook she sees the grade she’s accrued.

The LTI 1.1 diagram is shown next: 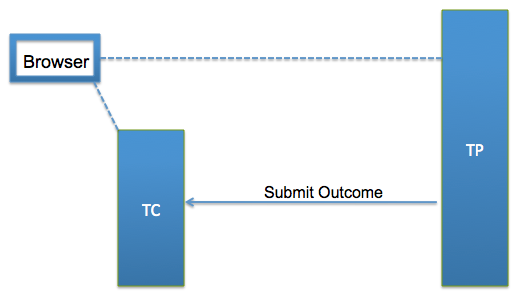 It’s not obvious from the diagram, but the message with the returned outcome is completely asynchronous from the launch.  That is, anytime after the launch, whether seconds or weeks, it can return the outcome to the gradebook.

(Explanation coming at the bottom of this document)

LTI 2.0 is a major rewrite of LTI 1.  It is designed to extend interoperability to the entire lifecycle of the tool not just to the launch point.  This change is so profound that it enables LTI 2.0 to be a platform not just for embedding a tool but also for creating:

The e-textbook vendors became aware very early on that LTI was an ideal vehicle to easily open books within an LMS.  Furthermore they could perform this integration in minutes rather than weeks.

However the next challenge became provisioning the books in the LMS so that the right books would be available to the right courses.  A school might have hundreds of courses each of which might adopt several books.  Furthermore some schools would adopt course-book pairs by mandate and others encouraged individual professors to make their own choices.  Provisioning thousands of links in a school using custom LTI parameters was a non-starter.  A best practice of creating book adoption applications evolved but required lots of proprietary web services.

LTI 2 (and LTI 1.2, see below) can fix this situation by supporting an LTI-launched application that is a book adoption application.  It supports the following:

The LTI 1-style launch is still essentially the same and shown as the dotted line but there are a couple of new interaction types. 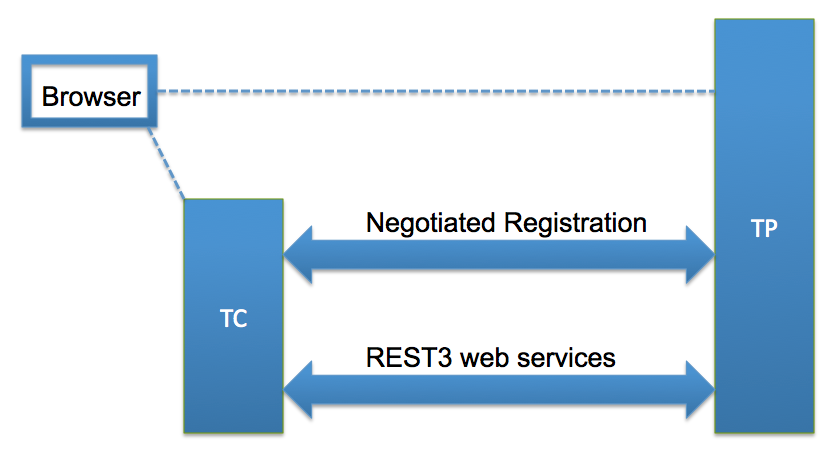 The major deliverable in LTI 2 is standardized, architected, REST services that implemented using industry best-practice.  Much more on these services and on the Registration phase is presented below.

REST web services are the preferred technique in usage today for implementing distributed services within web applications.  As often happens, the term is pretty sloppily used.  On the other hand, LTI has used a precise recipe for REST services based on the Richardson Maturity Model.

JSON is widely used because it is lightweight and simple to use.  The Linked Data (LD) extensions provide hypermedia linking between media types.

Most web service applications have stable interface contract definitions because both consumers and suppliers have a general agreement of what their capabilities and constraints are and what services each partner offers.   But educational partners are more loosely coupled.  Consider a few sample characteristics:

In any particular pairing of tool consumer and tool provider a specific interface contract needs to be struck and recorded.  This contract is called a Tool Proxy.  It is shown in a diagram below: 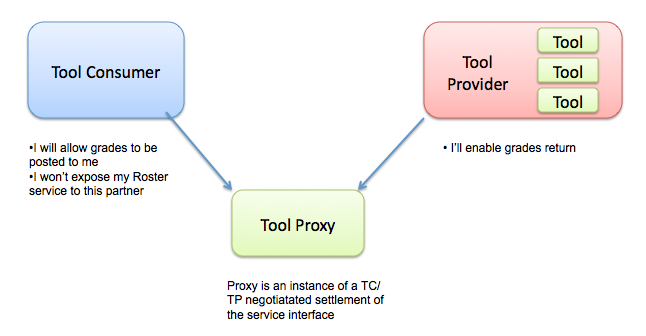 The Tool Proxy is negotiated by the two parties (TC and TP) automatically but allows human workflows on either side to intervene if necessary.

This negotiation is performed during the Registration phase shown in the LTI 2 Architecture diagram above.

The Registration phase also bakes the LTI key and secret into the Tool Proxy itself.  The key is defined by the Tool Consumer and the secret by the Tool Provider.

LTI 2 not only defines some common services, such as Tool Settings, but also provides the architecture for bi-directional web services.  This means that new services can be defined quickly without affecting the core standard.  All that’s needed to incorporate a new service is to modify the metadata in the TC or TP and re-register.

The services that are currently defined, or are in progress, are:

Allows the Tool Provider to send outcomes back to the Tool Consumer but with a) a richer palette of value types than a simple number and b) allow other learning metrics to be provided.

One of the really revolutionary features of LTI 2 is that it allows custom services to be created by partners and used either between themselves, or among any distinct sub-community.  These services snap right into LTI 2.  Another benefit of partner-provided services it that it allows new services to evolve organically before being submitted for full inclusion as an architected service.

If we go back to our cannon metaphor we see a major change in this LTI level.  Now the cannonball morphs into a spacecraft. 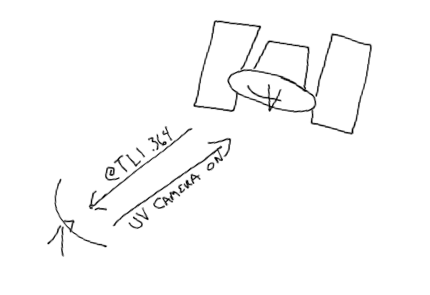 In LTI 2 the launch is still important, just as it’s still the most critical moment in the life of a spacecraft.  But after launch the interoperability is only beginning.  Course corrections, notifications, emergency alerts, status reports are all part of the expected interaction.

An LTI 2 environment expects that learning objects are not only launched but may then have a potentially constant stream of commands, alerts, outcomes, etc.

As mentioned above, LTI 1.2 is a hybrid of LTI 1 and LTI 2.  It’s being released simultaneous to LTI 2.  This is much like Apple’s simultaneous release of the iPhone 5c and 5s; i.e., to different functionality / price points addressed at the same time.

Here are the characteristics of LTI 1.2.

LTI 1.2 can provide a transitional step to LTI 1 based TCs by just adding a ToolConsumerProfile with no Registration phase required.