What are good metaphors for thinking about Next Generation Digital Learning Environments (NGDLEs)?

In the 2015 EDUCAUSE Learning Initiative research paper on the Next Generation Digital Learning Environment (NGDLE) the familiar metaphor of legos is once again called upon to represent user configurable learning environments:

“Since no single application can deliver in all those domains, we recommend a “Lego” approach to realizing the NGDLE, where NGDLE-conforming components are built that allow individuals and institutions the opportunity to construct learning environments tailored to their requirements and goals.” 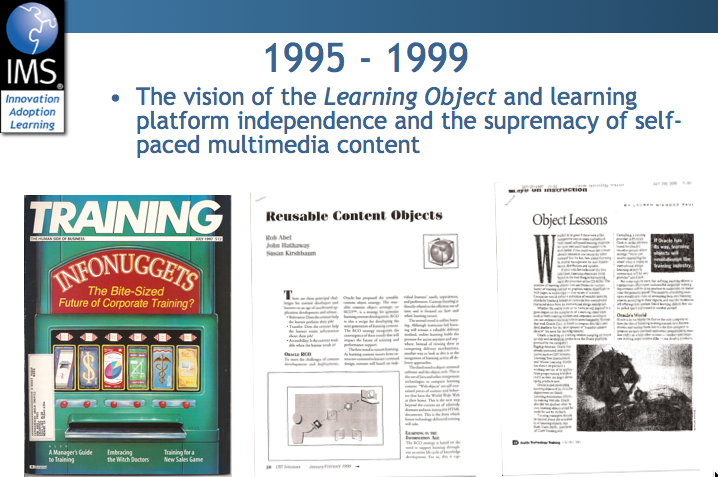 The reason I say “once again” is that the lego metaphor has been called upon many times before since the early days of e-learning (last half of 1990’s) when it was used to describe reconfigurable “learning objects” that could potentially be chained together to meet personal learning preferences and goals.  There was a lot of coverage and development around the learning objects concept - showing some magazine and articles here that I was personally involved with.

While the use of legos as a metaphor in learning is very convenient and one that IMS has used from time to time (for instance see the cover of the 2014 annual report), legos are really not adequate to describe what is really needed. Of course, it depends on exactly how one thinks of legos. I tend to think of them as preconfigured shapes that can be joined into a whole.  However, the connections are rather rigid and very localized. 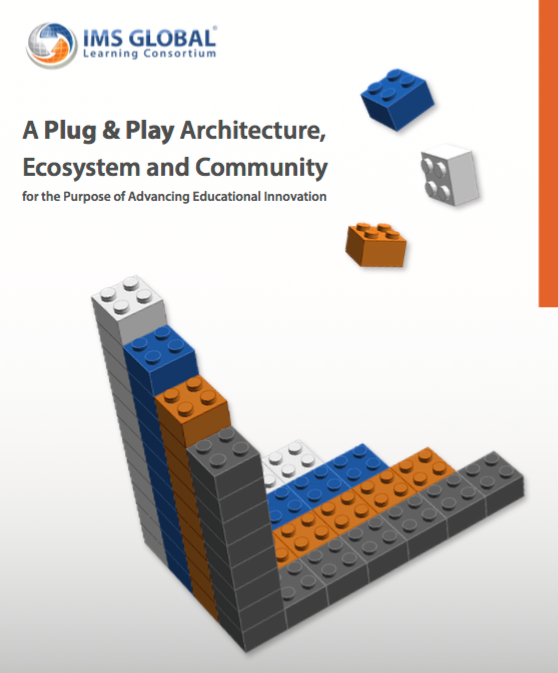 A lot of evolution has occurred in the last 20 years. Of course the learning “platform” (software that enables a learning experience and environment beyond simple interaction with content) has become a prevalent component in education.  But perhaps the most important evolution has been from “content that moves around from system to system” to “content that is hosted and accessible via a web interface.” That later category of content might also be called a web application or just “an app.” An app typically contains its own “learning platform” of some sort, meaning the web application is typically intertwined with the content and not as broad in its ability to support “LMS-like” features.

In creating next generation learning environments the connections that need to be supported are among a cooperating constellation of these web applications.  How exactly they cooperate is of course key to interoperability, but a logical starting point is via the education institutional platforms, such as an LMS, a portal, an app launcher, a student information system, or some combination of these.  Thus, another metaphor we have used in IMS is a configurable constellation of connected apps.  I’ve been using that metaphor in IMS since 2007 – and shown here is one of those uses from a 2008 presentation made for ELIG in Europe. 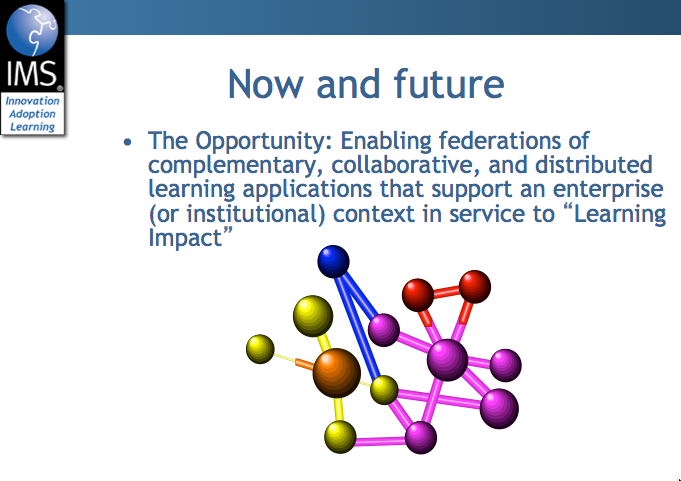 It should also be noted that some things HAVE NOT changed much since the first use of legos in e-learning. One that is very important to keep in mind with respect to the vision of user configurable NGDLE is that even though the concept of fitting learning objects from different sources sounds good that it is nearly impossible to do in any automated fashion. There has been success in configuring personalized learning paths from content modules from a single source in an automated fashion (like an adaptive learning application) but generally all attempts at automating content reconfiguration across suppliers have fallen short because stuff has to be designed to really work well together.

The NGDLE research paper also comes to the conclusion that the architecture is a “confederation” and that the right model for the architecture may be a “mash-up.” This is a model that we like a lot in IMS.  Indeed, in the earlier days of Learning Tools Interoperability (LTI) Dr. Chuck Severance spoke a lot about the user paradigm for LTI being a “mash-up” of web applications, much like Google maps appears in any web site.  More recently we like the user paradigm of the learning platform that can be invoked across apps, like a familiar toolbar that floats on top of any app, rather than the container in which things must be placed.  We’ve seen a couple of nice early prototypes of this idea in IMS, including in the Learning Impact Award nominations.

In summary, what we have learned in the last 20 years is that users can sort of deal with a pallet of apps (like those on your phone or tablet) that they have chosen, and that suppliers, even publishers of content, like this approach to offering and selling products. But, configuring a set of independent apps is a lot easier than configuring a cooperating set of apps.  The interoperability needed is much more challenging and certainly in education there needs to be some “learning design” across the connections performed by a human (a teacher, an instructional designer, a student). In addition, the user interface/usability of this educational app mash-up of sorts is a really important aspect of the design.

Next up: What type of interconnections will next generation digital learning environments require?

I’m Gonna Find Out What I Got (Focus on Mastery)

Together, We are Going to a Brand New Home

Hear My Train A Comin'

Inside the Transformation (Part 3)

A Change is Gonna Come

Inside the Transformation (Part 2)

Inside the Transformation (Part 1)

Getting in Tune to the Straight and Narrow