LTI 2: The future is here again, just a lot easier than once envisioned

Yesterday 1EdTech announced the public draft release of LTI 2 at the 1EdTech quarterly meetings in Nashville.

Here is what it's all about:

Whereas LTI 1 has revolutionized (by 10-100x – see the revolution blog post) the time and cost of integrating digital content and resources into learning platforms at a pretty basic level, LTI 2 takes that same revolution at least 10x more to enable much more sophisticated and deeper integrations – with therefore even greater gains in speed and cost compared to today's proprietary integrations.

Public draft release means that 1EdTech is encouraging public feedback and collaboration on alpha implementations.  Within the 1EdTech member community we will be enabling such prototyping with a software implementation of an LTI consumer (in Ruby) developed by Vital Source.  Many thanks for Vital Source for leading the evolution to LTI 2 (along with Pearson, Blackboard and Cengage) and providing this software to help accelerate implementations!  The license for this code is purely for non-commercial use at this time because the next step to finalizing LTI 2 is for the 1EdTech member community coming together to put in place a conformance certification program. Once the conformance certification program is in place, we will release any prototype code (that provided by Vital Source, improvements made by other members, or by others in other programming languages) with our 1EdTech “traditional” Apache 2 open source licensing to encourage commercial implementation. We’re thinking that conformance certification may be ready in 3-6 months time – but this is entirely dependent on the contributions from the 1EdTech community.

LTI 2 has been under development for about 5 years.  Originally LTI 2 was envisioned as the “industrial strength” enterprise version of LTI. In fact, at one point in time what is now LTI 2 was the only true LTI.  The current LTI 1 was a result of a simplified subset and implementation approach of LTI 2 – resulting in the infamous Dr. Chuck Severance led evolution of first Simple LTI, then Basic LTI – and what is now LTI 1 and the most recently released version LTI v1.1 (which supports outcomes reporting back to the consumer).

Thanks to a series of very good decisions made by the 1EdTech member community, LTI 2 today is much easier to implement than was once envisioned! For standards, easy is essential!

Of course, the value of LTI 2 to the education community – and how soon that value manifests itself – will depend on how quickly various “learning platforms” become LTI 2 consumers. If you have “LTI 2’d” your application it still needs LTI 2 platforms to run in.  One of the great things about LTI is that it enables many types of software to be consumers of applications. Anything can plug into anything with LTI. (see LTI catalogue to see that some applications that are both consumers and tools).

LTI 1 will be supported indefinitely at this point.  In fact, there is much activity in developing LTI 1 extensions (see extensions web page).  The 1EdTech members made the brilliant decision at the 1EdTech quarterly meetings in Ann Arbor in August 2012 to ensure that all LTI 1 extensions would be created in a way to feed right into the more extensible LTI 2 architecture. We expect that most platforms will support both LTI 1 and LTI 2.

LTI has many advantages over LTI 1. Some of these are detailed in the briefing paper written by Stephen Vickers via JISC CETIS.

LTI 2 provides a more sophisticated and extensible platform for providing deeper integrations, and greater support for services and events. For example, tool providers will be able to specify where their links should appear in the LMS and provide support for user-selected languages. LMSs may notify tool providers when a course is copied, archived or restored to allow more dynamic messaging and updates between systems. LTI 2 builds on LTI 1 by incorporating more sophisticated outcomes reporting and a rich extensions architecture. LTI 2 uses REST and JSON-LD to deliver this new functionality. 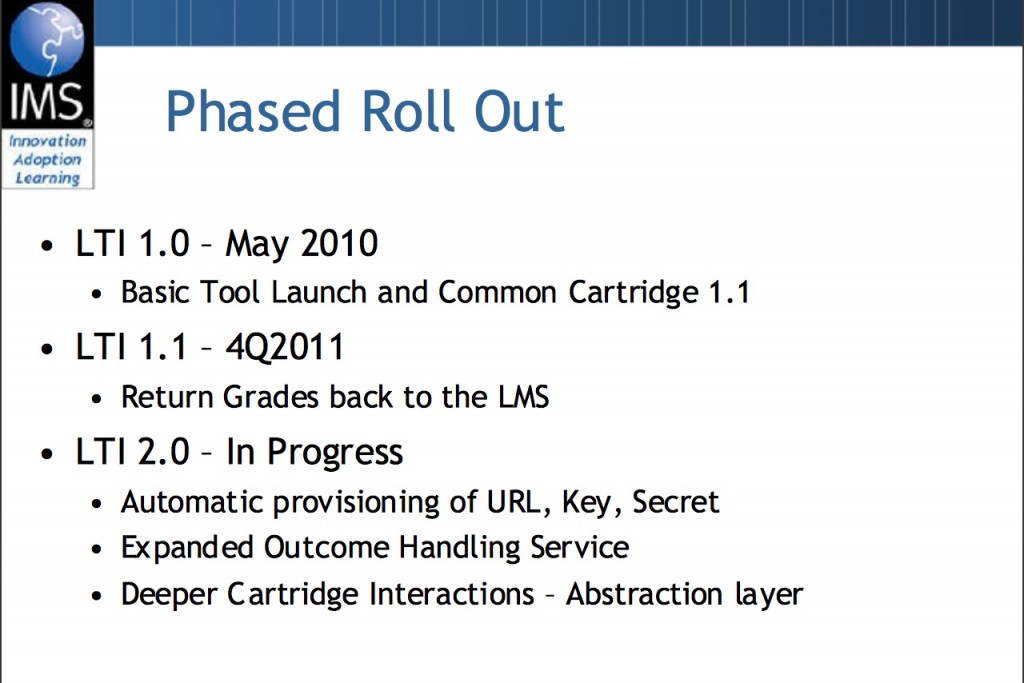 At a very basic level, what this means is that if there is a mismatch in terms of what version of an 1EdTech specification supports (versus the connecting tool) tow connecting products support it can be discovered automatically and adjusted.  At another level what LTI 2 means is that the goofy list of export formats for content (when exporting a course) could go away: the exporting software can communicate with the accepting software and negotiate the maximum interoperable subset. Many of the 1EdTech specifications involve optional levels of functionality – specifications like Learning Information Services (LIS) and the Accessible Portable Item Protocol/Question and Test Interoperability (APIP/QTI).  Ultimately, LTI 2 will allow the support of these services to be negotiated between certified applications.

Last week at EDUCAUSE CourseSmart announced a new analytics dashboard for users of their e-Textbooks.  The CourseSmart analytics dashboard is LTI 1 enabled. What this means is that it can use LTI 1 to plug into an LMS or other LTI consumer. However, what about the transfer of outcomes using LTI? CourseSmart is, in fact, participating on our 1EdTech e-textbook task force who are undertaking defining LTI extensions for passing “back” usage data. But, we expect that analytics information will be an area of differentiation for suppliers. In other words, we don’t expect all suppliers to agree.  One of the things that LTI 2 could enable is a negotiation of what data will be passed. For instance, one of a few designated schemas of agreed data or even custom schemas held in a registry. Thus, LTI 2 will put in place a foundation for enabling interoperability even for product-specific schemas. Pretty cool!

My thanks to the 1EdTech members for the dedicated work on LTI 2! Stay tuned.