School districts and suppliers are aligned on OneRoster

Some of the best interoperability standards capture the “dah” situations where custom integrations just add cost and little to no value beyond what a standardized integration brings.

Every K-12 student system, learning platform and application (of which a large district is dealing with hundreds) all solve the same problem – synchronizing the information on the courses, the teachers, the students – in terms of who should have access to what (aka authorization to tech people). But, they all solve it differently.

This has turned out to be the cause of massive time, cost, headaches for school districts.

1EdTech has many years experience addressing forms of this problem in higher education. One of 1EdTech’s oldest and most widely used specifications is something that is now called Learning Information Services (used to be called 1EdTech Enterprise back in 1999 when it was first created). About three years ago 1EdTech members doing some work in the state of Delaware began collaborating on a simplified and extended version of LIS for K-12.

Not long afterwards (about 2 years ago) Orange County Florida (George Perrault) came to 1EdTech with the same issue – but a higher sense of urgency. People in districts who are responsible for the availability of curriculum material (usually a pretty small group or many times even one person) have been drowning in this problem for a long time.  The thing is that George saw a solution to the problem and recruited a trusted supplier (Classlink) to help implement the solution while working with 1EdTech. The net result is OneRosterTM. One set of file formats and RESTful web services to exchange roster information.  The advantages of OneRoster are clear:

1.     No longer needing to spend the time and money to support all the special rostering formats of all the different EdTech products, publisher content and apps.

2.     The district has complete control over their roster information and decides which applications receive which portions of the data.

3.     It’s an open standard from 1EdTech – so ability to add/upgrade/switch among the very large 1EdTech ecosystem is a given.

4.     When used in conjunction with 1EdTech LTITM (Learning Tools InteroperabilityTM) to launch and communicate with the rostered apps, a seamless foundation for providing insight to teachers, students and parents with respect to engagement and progress is established (an advanced topic that is the academic motivation for connecting these apps in real-time). 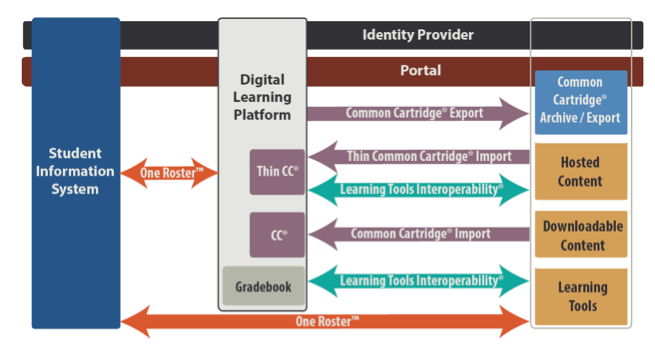 There are a few districts and suppliers that are implementing OneRoster now, with plans of at least 30 leading districts to go live in Fall 2016.  Indeed, school districts, led by Brevard County Florida, have organized their own “pledge site.”

When you find the “dah” everyone agrees – institutions and suppliers. I was pleasantly surprised along this OneRoster journey that even the suppliers were tired of the myriad of formats. This is a good sign: Suppliers are realizing that it is better to expend resources on improving the digital apps, tools, content than on myriad custom integrations. This is exactly what standards are meantto do: Shift the investment from the connectivity so that it can go towards the quality of the products.

But, K-12 suppliers planning to be ready to implement OneRoster in time for Fall 2016 back to school need to get ready now.  1EdTech is facilitating a special hands-on boot camp and plugfest for OneRoster at the 1EdTech quarterly meeting the week of February 22 at University of Maryland, University College.

At the February quarterly meeting OneRoster session, leading OneRoster supporters, such as Classlink, HMH, McGraw-Hill, Pearson, SAFARI Montage and others will be there to help the 1EdTech community members learn how to implement OneRoster and perform conformance certification.

At the May Learning Impact Leadership Institute in San Antonio, Texas a follow-up session will be held, including witnessing of the plugfest results by 1EdTech district members.

Hope to see you in February and May! 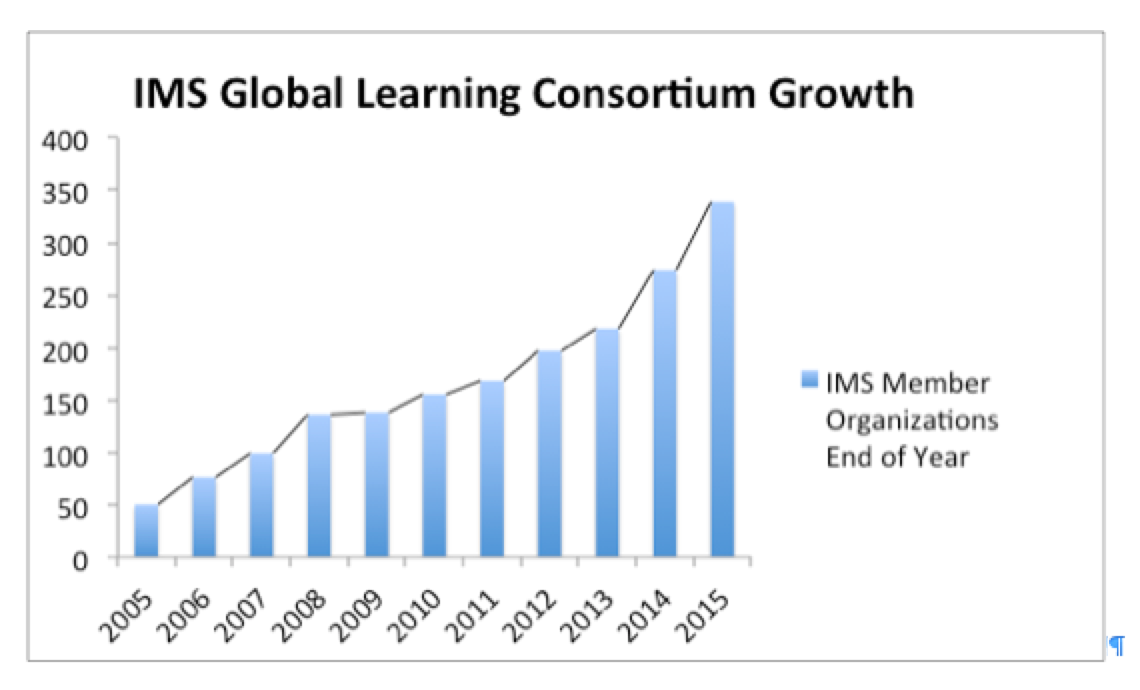 Well, while there is no way to know for sure, I would put good money on 1EdTech being the most rapidly going of any major tech standards consortium around the world. Indeed, most tech standards organizations we know of are at best flat to down – some way down. Unfortunately, many other education-related standards activities have perfected the art of treading the same old tired waters of highly restrictive standards created by a few "standards experts" rather than the marketplace.

Bucking the trend, 2015 was another year of record growth for 1EdTech Consortium. 1EdTech added 65 net new members bringing the total member organizations to 339 at end of year.  As many of you know, 1EdTech had a total of 50 members in early 2006.  So, in 10 years we are roughly at 7x and, of course, are adding more members a year now than we had total in 2006.

What is the effect of this growth?  1EdTech is having a very positive impact on the educational technology sector.  And the reach is growing. In 2015 1EdTech presented 50 times at major events! Not counting our own.  Almost 1000 people attended 1EdTech events in 2015. 1EdTech continues to grow its collaboration with high quality partners such as EDUCAUSE, APLU, AACRAO, Internet2, CNI, C-BEN, ISTE, CoSN, The Council of Great City Schools, IDPF/ePub, W3C, Mozilla Foundation, MacArthur Foundation and the Bill & Melinda Gates Foundation. 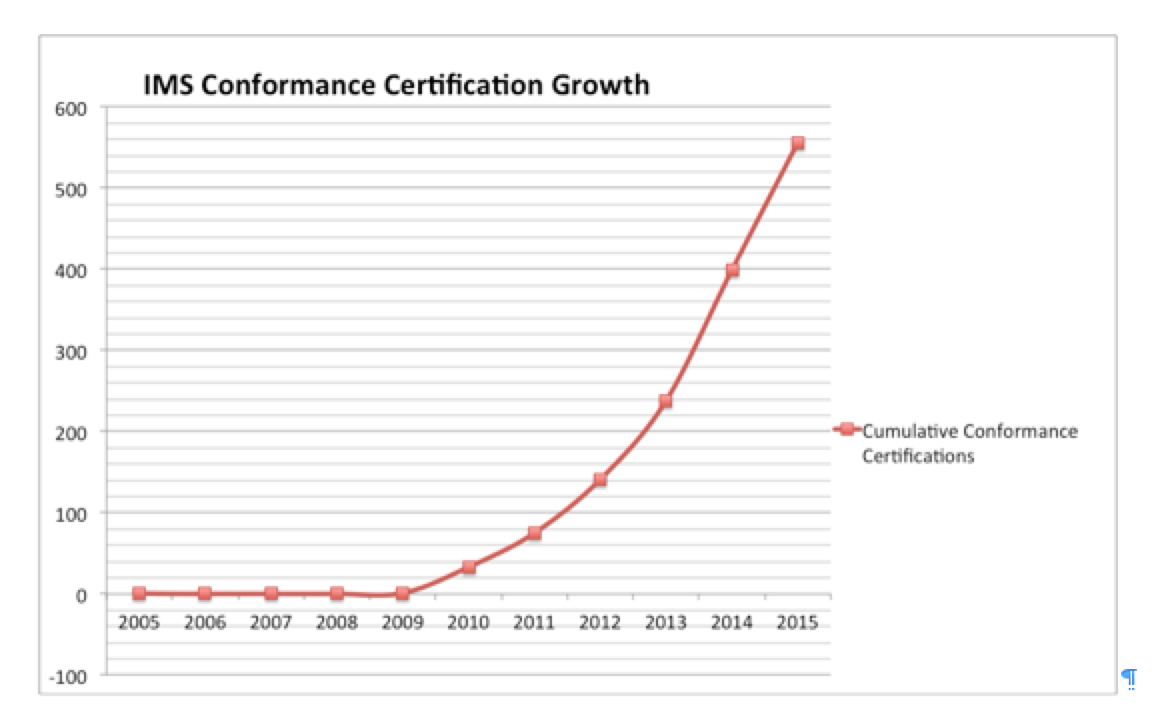 At least as important is the amazing uptake of the 1EdTech standards in the EdTech sector.  Believe it or not, there are now over 70 learning platforms (of a wide variety) that are 1EdTech certified as consumers of LTI (Learning Tools Interoperability).  There were a total of 157 conformance certifications issued by 1EdTech in 2016 – roughly 3 a week! Here are now more that 375 products that have been certified. You can take a look at the new Product Directory section of the new 1EdTech web site, available at imscert.org.

Speaking of the new web site: Wow! Lot’s of work for all concerned – but well worth it. It is a lot easier to understand the 1EdTech Initiatives and 1EdTech Technical work, not to mention the different opportunities for membership, supplier leadership and institutional leadership.

All of this is possible because of the leadership and investment made by the 1EdTech Member Organizations.  1EdTech is primarily about one thing: The education sector leading and taking responsibility for the shape of the EdTech ecosystem of the future. Everyone invests a little and gets a lot in return by collaborating on the open EdTech ecosystem.

I am very pleased and proud of the breakthroughs the members are making every day!  2016 is going to be another great year as the open EdTech ecosystem continues to grow and revolutionize the ease with which innovation can make its way in education institutions around the world.

2015 was so busy that I found it difficult to find time to update the blog. Fortunately, 1EdTech’s growth has allowed us to add some great staff, in addition to those you already know and love.  I’m hoping to write more frequent, brief blog posts to let you know about the 1EdTech priorities and accomplishments.